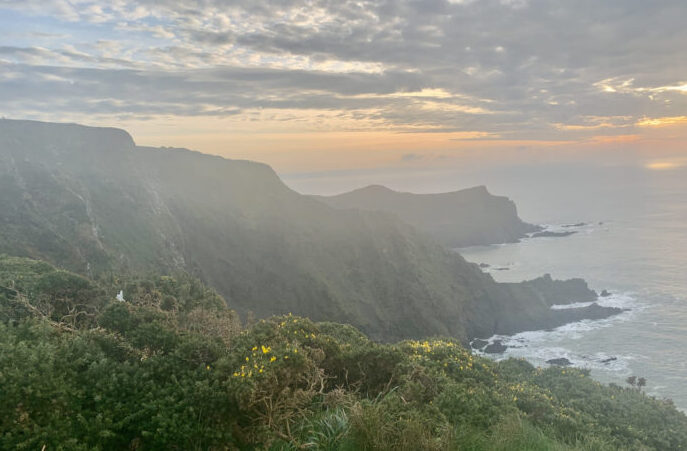 Robert Stephen Hawker, the eccentric Parson of Morwenstow in coastal North Cornwall, is credited with creating the Harvest Festival we celebrate today.

Two weeks prior to this first Harvest Festival service, a notice went up in the village which read:

“Let us gather together in the chancel of our church, and there receive, in the bread of the new corn, that blessed sacrament which was ordained to strengthen and refresh our souls.”

On the 1st October 1843 “Parson Hawker” gathered his parishioners for the very first Harvest service thanking God for providing such plentiful food. The local corn bread was taken at communion during this service.

Although Christians had always given thanks for the Harvest, Parson Hawker turned it into the annual ritual it now has become. News of his Harvest service was spread through church magazines and then universally adopted.

Hawker was born in Plymouth, his father was a Cornish curate. As the family was poor, Hawker had to married a lady 20 years older, in order to have the necessary funds to attend Magdalene College in Oxford. Ordained in 1831, Hawker was totally elated to be offered Morwenstow, an unappealing parish that had not had a vicar in residence for over 100 years.

Hawker had a great fondness for the bleak Morwenstow church, which he had known all his life. The arches were Norman, the font was Saxon, and the waves crashing on the cliffs below could be heard throughout the church.

His personality has been described as: “irresistibly quixotic and mischievous, displaying the disconcerting mixture of shrewdness and naivety that is often the hallmark of a saint”.

Here are some excellent examples of his eccentricity:

As the Harvest is celebrated again this year, don’t forget this unconventional old chap, Robert Stephen Hawker. The man who started this lovely tradition in Victorian times down on the wild North Cornish coast. It is surprising, perhaps, he is not better remembered.

It’s a great spot to visit, with the “Hawker’s Hut” being the National Trust’s smallest property. It’s a small shed type structure on the side of the cliff, overlooking the wide seas that the Parson built to write poems and smoke in. The view is amazing up there.

Another nearby place worth a visit is The Strangles

Saturday is change over day, please select Saturday as the holiday start date.

Active & Outdoors (44) Around The Farm (33) Cornish Food & Drink (23) Cornish News (7) Family Fun (46) Guest Info (13) Important Info (3) Places to Visit (42) Special Offers (1)
We use cookies on our website to give you the most relevant experience by remembering your preferences and repeat visits. By clicking “Accept All”, you consent to the use of ALL the cookies. However, you may visit "Cookie Settings" to provide a controlled consent.
Cookie SettingsAccept All
Manage consent

This website uses cookies to improve your experience while you navigate through the website. Out of these, the cookies that are categorized as necessary are stored on your browser as they are essential for the working of basic functionalities of the website. We also use third-party cookies that help us analyze and understand how you use this website. These cookies will be stored in your browser only with your consent. You also have the option to opt-out of these cookies. But opting out of some of these cookies may affect your browsing experience.
Necessary Always Enabled
Necessary cookies are absolutely essential for the website to function properly. This category only includes cookies that ensures basic functionalities and security features of the website. These cookies do not store any personal information.
Non-necessary
Any cookies that may not be particularly necessary for the website to function and is used specifically to collect user personal data via analytics, ads, other embedded contents are termed as non-necessary cookies. It is mandatory to procure user consent prior to running these cookies on your website.
SAVE & ACCEPT